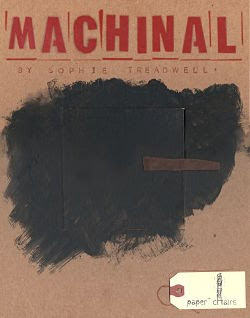 This production of Machinal by Sophie Treadwell, currently playing at the Salvage Vanguard Theatre, is a memorable staging of a 1928 shocker -- which in 21st century terms means that it is endearingly two dimensional.

Back in the 1920's,most American theatre art was unexciting, conventional or cast in moral platitudes. At the same time, newspaper reporting of crimes were sensationalistic and very big business. In a time when both radio and cinema were still new,big city newspapers' accounts of accounts of murders and of murder trials sold a lot of papers.

Those days have been memorialized in cinema and in theatre since then. For example, Chicago journalist Maurine Dallas Watkins scored a big hit in the theatre with a thinly fictionalized account of the 1924 exploits of two murderesses, both of whom were acquitted. That 1926 play ran for 171 performances and was the basis for Kander and Ebb's 1975 musical Chicago, featuring the oh-so-innocent but oh-so-guilty Roxy Hart -- a musical revived successfully in New York in 1990 and made into an Academy- award-winning film in 2002.

Journalist SophieTreadwell scored a similar succès de scandale with Machinal, a poetic, expressionistic imagining based on the crime and execution at Sing Sing prison of Ruth Snyder. Treadwell had covered the 1927 murder trial. The state execution of Snyder in January, 1928 was a huge sensation, both because this was New York's first execution of a woman since 1899 and because the New York Daily News published the next day a photo of the execution, taken with a hidden camera strapped to the ankle of one of its journalists.

Machinal opened in New York in fall, 1928, featuring the relatively unknown actor Clark Gable in the pivotal role of a relaxed seducer whose casual attitude (Quien sabe? Who knows what might happen?) eventually opened the way for the Young Woman to undertake murderous action.