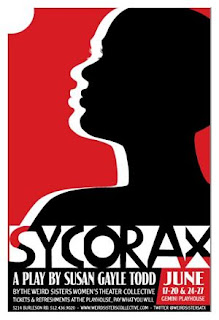 The Tempest opens with brief scene of desperation, with sailors and passengers struggling against an overwhelming storm. Following that vivid moment, in Act I, Scene 2 Shakespeare gives us a full measure of background and exposition.

He paints a huge and vivid canvas. Prospero reviews for his daughter Miranda in great detail the plot that expelled them both from Naples, casts a sleeping spell upon Miranda, interrogates Ariel and recalls the black spell cast by "the foul witch Sycorax." Waking Miranda, the magician calls forth the "poisonous slave" Caliban, son of Sycorax. Master and monster engage in snarling dialogue that tells us how Prospero overcame the "hag-seed" Caliban, taking away his dominion of the island, humiliating him and enslaving him as reprisal for lusting after Miranda.

With all those antecedents in place, the action of The Tempest begins as Ariel with enchantment and song drives Ferndinand, son of the King of Naples, onto the stage.

Susan Gayle Todd, a founding member of the six-year-old Weird Sisters Theater Collective, rolled Shakespeare's canvas back, locating a wide, almost blank panel. It was barely touched with the outline of Sycorax, a hint of Ariel's service to the witch, and an unelaborated event in Algiers that resulted in banishment, since "for one thing she did/ They would not take her life." Todd tells the imagined story of Sycorax as a woman healer, an African woman in Arabic Algiers.