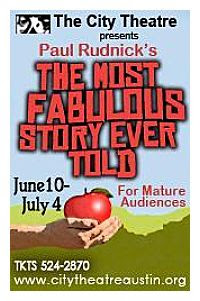 UPDATE: Review by Katherine Kloc for the Daily Texan, June 16

The City Theatre presents The Most Fabulous Story Ever Told, Paul Rudnick’s Broadway smash hit about the hilarious retelling of The Old Testament by the original couple – Adam and Steve, as well as their friends Jane and Mabel.

In the beginning, God created the heavens, the Earth and the overture to “Gypsy.”

This is the Old Testament according to Paul – playwright Paul Rudnick that is - who has brought considerable wit and gleeful gay sensibility to a deliriously funny take on the Book of Genesis. The play is Rudnick’s response to the claim “God made Adam and Eve, not Adam and Steve.” So, led by an all-knowing stage manager, the play follows the first couple, who not only have to worry about being expelled from the Garden but their abs as well. We also meet Jane and Mabel and together, the quartet survives the centuries – from the Creation to the first brunch. They endure the Flood, visit Pharaoh’s Egypt, and experience the wonders and pains of modern - day relationships. Reminiscent of medieval Passion plays where popular characters were inserted into Bible stories to entertain while teaching, the lessons here are tolerance and understanding, taught with loads of laughter and fun.

Rudnick, writer of I Hate Hamlet, Jeffrey, In and Out, and Addams Family Values, moves us to consider life and relationships from new perspectives. The New York Times wrote: "Line by line, Mr. Rudnick may be the funniest writer for the stage in the United States today...One-liners, epigrams, withering put-downs and flashing repartee: these are the candles that Mr. Rudnick lights instead of cursing the darkness, although he does a lot of cursing, too ... a testament to the virtues of laughing ... and in laughter, there is something like the memory of Eden." Variety wrote: "Funny it is…consistently, rapaciously, deliriously…easily the funniest play in town." And the NY Daily News: "…there is no one writing for the stage today who is capable of more acid quips or hilarious rejoinders than Rudnick…Even if there's a part of you that will be chagrined by this play's uncertain attitude toward religious beliefs, you will find yourself laughing uncontrollably throughout the evening."

With a young, talented cast led by some surprise Austin veterans and directed by Daniel LeFave (CTC’s Christmas Belles), the show is a delightful mélange of hilarious one-liners, philosophical introspection, and a celebration of the very fabulousness of gay culture (and otherwise) throughout the ages. The production is recommended for mature audiences with strong language, brief nudity and adult content. Talk backs follow each Sunday show, led by local arts and gay and lesbian organizations. Check the website for the talk back schedule.