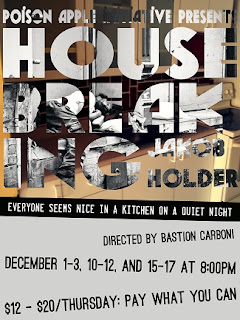 A MILESTONE for ALT:

With this post AustinLiveTheatre.com has published 2500 articles about Austin theatre since June, 2008!

by Hannah Bisewski and Michael Meigs

What does a theatre space feel like? How is it supposed to make us feel? Those of us in the small crowd gathered for the opening of the premiere run of Jakob Holder’s Housebreaking were asking ourselves those questions in some form or other. People from the Poison Apple Initiative funneled us into a cramped living room nook in a discreet East Austin housing venue. We found ourselves in the kitchen of a fairly average but rundown home. But that’s a part of the story, too.

The play opens with a painfully long blackout, finally interrupted by the entrance of two men through an oddly placed kitchen door. One of them, Chad, has brought home with him a homeless man – Carmine -- he met outside a bar. Chad treats him with an erratic combination of pity and disgust. With dark, voyeuristic curiosity about the hobo’s lifestyle, he drills the baffled Carmine with questions, only to express repulsion at his responses. Carmine once had a home but has lived on the streets since it burnt to the ground. The exchanges reveal more and more deficiencies in life of each man.