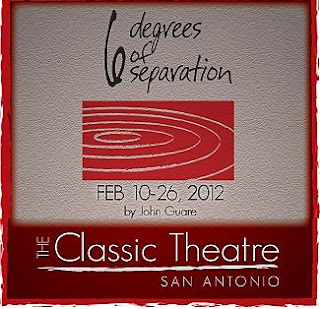 Six Degrees of Separation is a witty, biting, yet ultimately sincere commentary on what drives people: the desire for money, fame, social standing, comfort and a meaningful human connection.

I will not be part of this conspiracy! - Tess
It's not a conspiracy it's a family. - Flan

Six Degrees of Separation explores the existential premise that everyone in the world is connected to everyone else in the world by a chain of no more than six acquaintances, thus, "six degrees of separation".

The plot of the play was inspired by the real-life story of David Hampton, a con man who managed to convince a number of people in the 1980s that he was the son of actor Sidney Poitier. After the play became a dramatic and financial success, Hampton was tried and acquitted for harassment of Guare; he felt he was due a share of the profits that he ultimately never received.