A Year in the Life of William Shakespeare: 1599, by James Shaprio 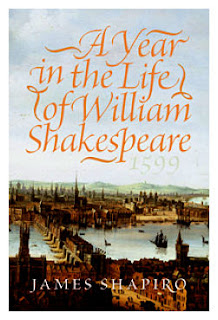 James Shapiro opens his narrative with the close-up, confidential tone of a detective novel. In his first paragraph he establishes the scene as snow-covered London on December 28, 1598 and continues,

As the snow fell, a dozen or so armed men gathered in Shoreditch, in London's northern suburbs. Instead of the clubs usually wielded in London's street brawls or apprentice riots, they carried deadly weapons -- "swords, daggers, bills, axes, and the like." [. . .] The Chamberlain's Men were in trouble, and the only way out was to get in a bit deeper.

You'd be hard put to situate your story any more in medias res than that. Headed by master carpenter Peter Street, this gang is about to disassemble a theatre building and haul every bit of it away to a warehouse facing the frozen Thames. Two days earlier the Chamberlain's Men performed at Elizabeth's court at Whitehall Palace and they were expected there again on New Year's Day. In the interval their laborers were reappropriating the timbers, lumber and fittings from the site where their lease had expired and storing the dismantled theatre for later use on a south bank property with a newly signed 31-year lease.

Given the dispute over the ownership of the building that would become the Globe, the enterprise had the makings of a conspiracy. It was also a new type of business venture. Richard Burbage had convinced five company members to invest the enormous sum of 70 pounds each for the new construction. In exchange, each was to receive ten percent of the profits of the new venture. Among those investors were Will Kempe, the company's renowned clown and jig-maker, and William Shakespeare, its principal playwright.

The theatre raid isn't the only developing story available to Shapiro with his choice of the final year of the sixteenth century. Shakespeare was at mid-career, of course, and in the following twelve months he and the company would be premiering Henry the Fifth, Julius Caesar, and As You Like It. At the end of the year Shakespeare would be writing Hamlet, a remarkably different type of play both for him and for the English stage. In addition, intrigue and politics at Elizabeth's court would be deeply marked by the mercurial Robert Devereux, second earl of Essex, who had ambitiously courted the queen. Elizabeth would send him off to Ireland with the assignment to put down Tyrone's rebellion; Essex would fail, negotiate ineptly with the adversary, and then abruptly sail home and ride back in haste to burst in upon Elizabeth in her private quarters. By Easter of 1601 he would be dead -- executed for conspiracies against the queen.