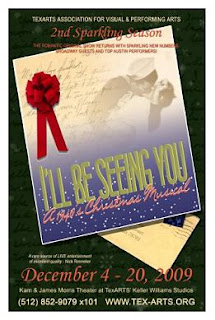 UPDATE: Review by Robert Faires in Austin Chronicle of December 10


UPDATE: Lisa Scheps of KOOP-FM speaks with Todd Dellenger and plays music used in the show -- click to listen to Dellenger describe the origins of the script and his approach to directing it on her program "Off Stage and On The Air," November 30
Received directly:

TexArts' original sold-out holiday review
is back for a 2nd sparkling season with
new musical numbers!

I'll Be Seeing You

is an original 1940s musical/musical revue from TexArts' Todd Dellinger that received its world premiere to sold-out, wildly enthusiastic audiences in 2008. It weaves the narratives of two now-grown neighbor children of World War II with letters to & from the home front, with slides, videos and popular holiday tunes of the era. It's a sparkling and warm family show that is sure to become a tradition for the Austin region.