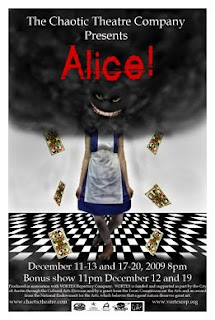 UPDATE: Click to view feature by Brian Paul Scipione in the December 2009 Insite magazine: "How Far Down the Rabbit Hole Are You Willing To Go?" [Click to download .pdf file of the entire December 2009 issue - 5.2MB]

The world premiere production of

From the twisted mind of the Chaotic Theatre Company, comes Alice!, a story about a young girl’s descent into madness. Along this journey she meets characters with sinister smiles and outrageous personalities in the world premiere of this new play by James Jackson Leach, based on the eccentric tales of Lewis Carroll.

Throughout the show you will experience interactions like nothing you have ever seen before. Menacing laughter will fill your ears and engulf your mind. You will be torn between two worlds: the harsh reality of Blackthorn Asylum and the fantastical world of Wonderland.

Don’t be afraid if you feel a slight caress around your ankles and a twinge down your spine. (Click for video teaser!)

The VORTEX Café is now serving fabulous sandwiches, tamales, cake and ice cream, in addition to our exceptional assortment of beer and wine and homemade sangria. Come early, stay late.