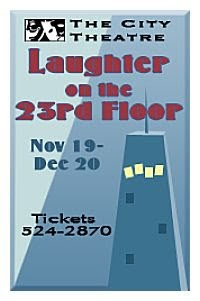 Ring in the holiday season
at City Theatre
with Neil Simon’s comedy of high jinks, good times and

Laughter on the 23rd Floor
directed by Andy Berkovsky

If Broadway ever erects a monument to the patron saint of laughter, Neil Simon would have to be it. And The City Theatre Company is thrilled to announce the holiday run of his hilarious comedy Laughter on the 23rd Floor, an autobiographical farce inspired by Simon’s own career churning out jokes for Sid Caesar’s Your Show of Shows, where he worked alongside of Mel Brooks, Carl Reiner, and Larry Gelbart.

The comedy plays November 19 – December 20, Thursday through Sunday at The City Theatre.

Laughter introduces an assortment of zany and oddball writers, many based upon actual personalities, including Simon himself. The play chronicles the outrageous antics of The Max Prince Show, a 1953 variety show under the pressure of McCarthyism, censorship, and, of course, the egos and individuality of the writers themselves.