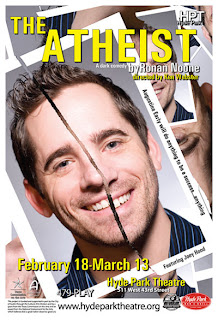 presents the Southwest premiere of


The Atheist is a wickedly funny dark comedy about a young journalist who is high on ambition and low on morals. Augustine Early is a reporter who will do anything to be famous, even if it means blackmailing a Congressman for a story that will make Augustine a star.

The Boston Globe called this show "viciously funny . . . especially to anyone who cares about the creeping power of tabloid values even in the 'serious' press.”

Curtain Up called it “a thrilling ride.”

Atheists, Christians, Jews, and Muslims will all find The Atheist a savagely funny night of theatre. Tickets are $19 and $17 for students, seniors, and ACOT members on Fridays and Saturdays. Thursdays are pay-what-you-can.

Hyde Park Theatre is located at 511 W. 43rd. Tickets can be charged online at www.hydeparktheatre.org, or by phone at 479-PLAY.
Posted by Michael at 6:40 PM