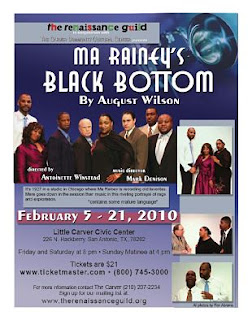 In a Chicago based recording studio, Ma Rainey's band players, Cutler, Toledo, Slow Drag, and Levee turn up to record a new album of her songs. As they wait for her to arrive they banter, tell stories, joke, philosophize and argue. As the play unfolds it becomes clear that the tension is between the young hot-headed trumpeter Levee who has dreams of having his own band and veteran players Cutler and Toledo.

By the time Ma Rainey does turn up in full regalia and entourage in tow the recording schedule is badly behind, throwing the white producers Sturdyvant and Irvin into more and more irate disarray. Ma's insistence that her stuttering nephew Sylvester should do the voice intro to the title song causes more havoc.

As the band waits for various technical problems to be resolved the conflict between Levee and Cutler reaches a boiling point.