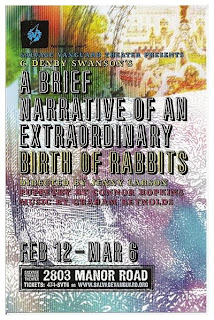 UPDATE: Review by Avimaan Syam for the Austin Chronicle, March 4


A Brief Narrative of an Extraordinary Birth of Rabbits
by C. Denby Swanson

In England in 1725, a young woman named Mary Toft was several weeks pregnant with her third child, and the family was hungry. She chased rabbits through her fields, hoping catch one and cook it. But the rabbit always got away.

Soon after, she went into labor - and miscarried a rabbit. During the course of the next four months, Toft claimed to give birth 18 times to rabbits, or pieces of rabbits. Two of the three prominent physicians who examined Mary Toft believed that her rabbit pregnancy was scientifically possible.