ALT PROFILE: Measure for Measure, Moving into the Rollins Theatre 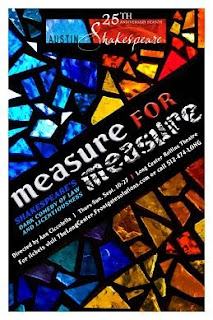 
UPDATE from the Asylum Street Spankers:
The Spankers will perform a set before this Friday's performance of Austin Shakespeare's "Measure for Measure." We play at 6:30 on Friday, September 18 at the Rollins Theater in the Long Center at South First and Riverside in Austin. This show is only for people going to the play, so if you've been wanting to see "Measure for Measure," this Friday is the night! For tickets, go to the Long Center box office on-line.

"Austin likes its comedy dark," Robert Matney told me. "As evidenced by the contemporary work that's being done here by Hyde Park Theatre and by Capital T, among others. And Measure for Measure is absolutely Shakespeare's darkest comedy."

"There are laughs, but the situation is stark. Shakespeare emphasizes polarity and conflicting views regarding ethics, authority and sexual conduct."

"Measure for Measure has gallows humor and a dramatic ending with identities revealed and justice meted out, but Shakespeare does not provide pat resolutions either for the conflicts or for the romance. It's not clear that anything has really changed."

Austin Shakespeare took possession of the Rollins theatre two days ago, and last night's rehearsal was the first in which the cast was directly experiencing the space that they will be filling with Measure for Measure from September 17 until September 27.