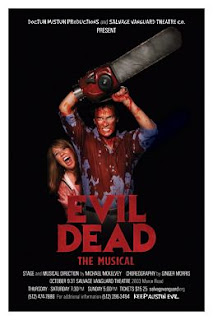 UPDATE: KOOP-FM's Lisa Scheps interviews Michael McKelvey and plays recorded music from Evil Dead, The Musical on her program "Off Stage and On The Air, October 5. Numbers presented:

About the Show: With the approval of film director Sam Raimi and star Bruce Campbell, a musical version of the film Evil Dead was staged. The musical takes creative liberty with the plot line of the cult film trilogy, mixing together the characters and concepts of all three.

The original production enjoyed a successful run in Toronto and Montreal. The show went on to gain favorable responses from both critics and audiences during its 2006-2007 off-Broadway run. The musical has gone on to subsequent performances in Louisville, KY, Seoul, Korea, and Tokyo, Japan.