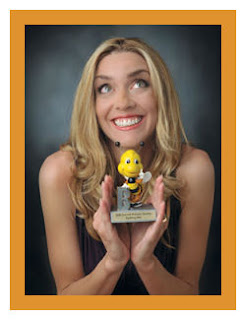 UPDATE: Review by Elizabeth Cobbe in the Austin Statesman, October 1

"Spelling Bee is riotously funny and remarkably ingenious.
Gold stars all around!" -The New York Times

Can you spell H-I-L-A-R-I-O-U-S? Nominated for six Broadway Tony Awards, The 25th Annual Putnam County Spelling Bee is a tuneful, offbeat and smart musical. Each night, the witty cast challenges audience members and Austin celebrities to a bona fide spell-off, but be prepared: this bee is anything but typical! Great fun for all ages, this show is a unique performance filled with surprising improvisations every single night!

Video of the Spelling Bee cast with Cong. Al Sharpton at the Tony awards,2005: