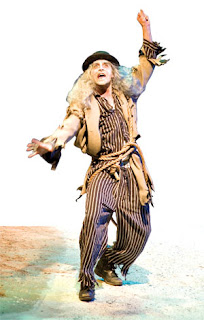 In the current edition of the weekly San Antonio Current, under the title Pursuit of Competence theatre journalist and classics professorThomas Jenkins lays down the paper's second annual blast at the rules and processes of the Alamo Theatre Arts Council's 'Globes' awards.

The Current approves some reforms in the process since 2009 but is especially incensed at the requirement that “Actors, designers and directors must be residents of San Antonio Metro area to be considered.” Jenkins ironizes at length over that requirement, adding, tongue firmly in cheek,

"Austin’s B. Iden Payne awards are open to anybody involved in a local Austin production regardless of citizenship — but that just proves that Austinites are egalitarian commies open to new visions and interpretations."
The Current offers its own Alternative slate of awards, finishing up with
"Best comedy and drama
The brouhaha over the ATAC Globe Awards.
"Lastly, some parting thoughts. We’ve nothing against the idea of the Globes in general, but we do have reservations about how the Globes purport to recognize theatrical excellence. At the very least, San Antonio should recognize excellent actors, designers, and directors willing to travel from other theatrical communities: theater is a uniquely collaborative art, yet SA seems hell-bent on burning its bridges to the rest of the artistic world. As for the Globes’ actual award process, other cities — Austin and Washington among them — have innovated superior systems that strengthen, rather than divide or disillusion, the theatrical community. Let’s swallow our pride (if not our Dodecahedra) and overhaul the Globes for good — and excellence. "
Click to view Jenkins' full article in the San Antonio Current. . . .
Posted by Michael at 9:52 PM