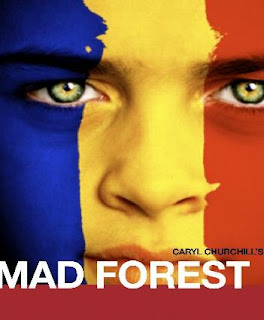 Theatre is a lens. The audience and the players look through the action in the playing space to perceive a story in the collective imagination. That story may be entertaining, or trivial, or profound, and the clarity of the vision is directly affected by the skill of the players and the willingness of the audience to engage.

The themes may be familiar. Take vampires, for instance. The century-old thrills of Bram Stoker's 1897 novel got a new boost in 1997 with Buffy. Since then they've proliferated in romance fiction, the Young Adult section in bookstores and libraries, and even Gnap! theatre's Dusk, an ongoing weekly PG-13 improv series down at the Salvage Vanguard now entering its second season. Most of the recent stories about all those undead guys are suggesting the fears and pleasures of adolescent secuality, an eminently marketable commodity in these United States. And by the way, October is the time of the theatre season when spooks and ghosts and vampires are brought frequently out onto the state.

In contrast, the vampire that appears unexpectedly in the third act of Churchill's Mad Forest is a lot older. Billy Rainey appears tired, tired to death and beyond death, sunk in the discouragement of a Romania that hasn't changed in 500 years, despite the excitements of the 1989 uprising, the overthrow of dictator Nicolae Ceausescu, his 90-minute hearing and the summary execution of Ceausescu and his wife Elena. Meeting the vampire in that powerful scene is Brazos Bell as an abandoned dog, desperate for food, companionship and a master. They dialogue and we understand the incomprehension between them. That scene in its magical realism captures the unsolved plight of Romania -- blood, time, history and a vulnerable desire to please.