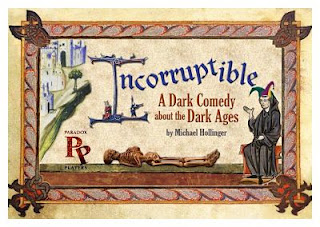 This cheery little satire might well have been titled Incorruptible - Men in Robes, marking a link to the comic style of the frankly inimitable Mel Brooks. As was always the case in Brooks' hysterical historical spoofs, the intent wasn't so much to portray the epoch as to emphasize that the seven deadly sins have always been with us -- particularly those of greed, envy and lust, the ones most likely to make us act in ridiculous ways.

Director Gary Payne gives us a quick orientation in the program, noting that in medieval times medicine was virtually non-existent and people sought miracles from the saints. Churches and religious orders zealously guarded bones believed to be relics of saints, and they required donations from pilgrims and peasants wishing to pray for saintly intercession.

Times were bad. Times were always bad (and, as Brooks famously quipped, "and the peasants were revolting!"). The comedy is set in a dismal little abby where relics of the local saint appear to have lost their effectiveness. The abbot and his principal assistant Martin lament the fact that business is down, the cupboards are bare, and a rival institution of nuns is said to be doing a booming business with a new set of saintly bones recently delivered to them. Don Owen as the abbot is mild, sweet-tempered and bewildered; Georges Spelvineau as the lanky scribe Martin has lots of barbed lines, as well as an aha! and mistrustful glower that strongly recall the great comedian Paul Lynde.