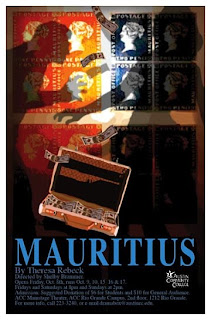 Theresa Rebeck's Mauritius is in many aspects a well-made play, fitting neatly into the 19th- and early-20th century tradition in the United Kingdom and in France (there, as une pièce bien faite). Cribbing quickly from Wikipedia, that Cliff's Notes of the Internet, one gets the reminder that the well-made play

has a strong neoclassical flavour, involving a very tight plot and a climax that takes place very close to the end of the story, with most of the story taking place before the action of the play; much of the information regarding such previous action would be revealed through thinly veiled exposition. Following that would be a series of causally-related plot complications. . . . [Plot twists may] bring about an unexpected reversal of fortune. . . . The reversal will allow for a quick dénouement, and a return to order, at which point the curtain falls.

Sound familiar? The well-made play has long been the framework for television drama and for motion pictures. Viewers, like spectators, like to have a story sharply defined, characters first viewed in full motion, a puzzle or two, an unexpected revelation and a satisfactory outcome. Mauritius is that sort of story.
The audience accepts the premises of the story, a suspension of disbelief that may in fact be considerable. In Rebeck's tale, you are required to believe that a New York tough guy with dubious connections and lots of cash is passionately enamored of philately. He has such a vast knowledge of stamp collecting that he's immediately lured and later enthused by two vanishingly rare mid-19th century stamps issued by the British colonial officials in Mauritius. Where did those rarities come from? Some girl off the street carried them into Phil's Philately Shop in a single stamp album that Phil refused to examine. Dennis, the guy lounging in the shop for no apparent reason, recognizes their worth and is off like a lighting bolt to work a with tough guy Sterling.