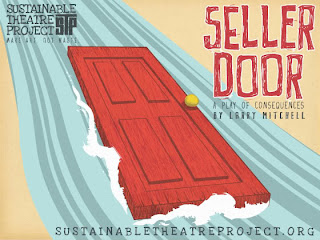 The Sustainable Theatre Project is documenting the life-cycle of a new play Seller Door.

What does “life-cycle” mean? It means we’re going to film every aspect from planning to production of a live performance. Everything from auditions and production meetings to artist interviews and a live performance will be filmed, edited and produced in a one-of-a-kind documentary/recorded live performance DVD set. The project includes three specific areas of focus: The Play, Sustainability and the Video Series.

It’s like funding three projects in one! A live performance, conceived and executed sustainably and a professionally produced film!

Seller Door is a play about consequences. It’s about a Barker, the people he gets to go through a door and what happens to those people once they go through the door. For the live production, STP will use an empty space, a non-traditional theatre space, perhaps a store front or vacant warehouse. Without giving too much away… there will be a Barker, a thief, 25 lbs. of pretzels and a room that fills with… well, that would be giving too much away. The execution of the play will be an experiment attempting to blend the “fourth-wall”, observer based, story-telling theatre of tradition with the contemporary shift toward audience participation, experiential theatre that has become popular as of late. With Seller Door, STP strives to create an event that is equal parts story/observation and experience/participation that will uphold the ritual of theatre and embrace the newest trends in theatre.