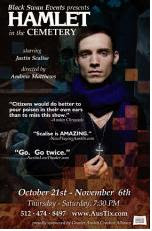 Justin Scalise as Hamlet is intent and impressive. AustinLiveTheatre had that to say and more in the September 25 ALT review of essentially this same production as presented downtown at the Scottish Rite Theatre -- in all too short a run and with a curtailed final week.

This staging is by Black Swan Events. The swan is new hatched and because of the surprisingly poorly attendance at the Scottish Rite staging, it's new fledged, as well. Perhaps to their surprise, and certainly to mine, Hamlet turned out not to be an automatic break-down-the-doors success downtown, despite the impressive acting triple play Scalise-to-Babs George-to-Harvey Guion, supported by that canny and adept cast. Perhaps some folks see Hamlet was one of those "difficult" Shakespeare plays, unpleasantly full of brooding and plotting.

The swans have been working to counter that. Mike Lee at KUT-FM gave them his occasional two-minute slot at Arts Eclectic last week and Lisa Sheps at KOOP-FM had them on for twelve minutes on her weekly Off Stage and On the Air (see below for those embedded audio bits).

Director Andrew Matthews replaces Guion as the usurping Claudius, giving a slightly different flavor to that triple play. Matthews is visibly closer in age to Scalise's Hamlet, which is entirely plausible -- making him a much younger brother to the murdered king, with plenty of manly energy and lots of interesting possibilities for the back story. Ashley Edwards is an ageless Gertrude, sharp of profile and sharp of presence, highly aware of her own precarious position. Both Matthews and Edwards are confident and convincing in their roles.

Read more and listen to audio at AustinLiveTheatre.com . . . .