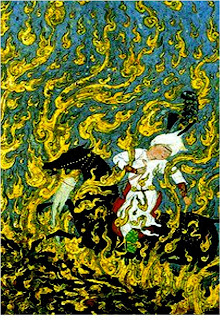 That Philip Kreyche is a dab hand at theatre, a young man with imagination and a taste for the exotic. His earlier piece Love Me was an expressionist treatment of incidents in the life of the Austrian expressionist painter Oskar Kokoschka. He staged it first at a summer workshop at Austin Community College and then brought it back for FronteraFest.

I hadn't heard of Kokoschka. Kreyche's piece prompted me to do some research -- which means, these days, hitting Google and musing over the reduced-size images of the weird and wonderful portraits for which Kokoschka is famous. And during the summer while wandering in Stockholm's Moderna Museet, I came face-to-face with Kokoschka's larger than life size portrait of Joseph de Montesquiou-Fezensac. It was an eerie, satisfying moment, one that I owe to Kreyche's reach beyond the ordinary.

Kreyche and friends staged his second original script earlier this month at the woods at the southwest corner of Dittmar and South First, 'way south in Austin. Company member and colleague to Kreyche Ryan Manning explained that their Wit's End Theatre Project takes its name from that piece of ground: Witt's End, formerly a stopping point and campground for visitors to Austin.