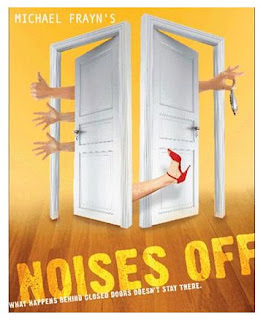 The Way Off Broadway Community Players in Leander are celebrating their spacious new locale by turning the theatre inside out with laughter. Literally.

Michael Frayn's Noises Off is a lively amusement that pokes good-hearted fun at the conventions of the stage, starting with the most basic one: the agreement that we in the audience will accept you, the actors, as the characters that you are pretending to represent. You settle into your comfortable seat in the new WOBCP's wide and spacious new auditorium and accept the silly business of housekeeper Mrs. Clackett's exposition with the telephone and the newspapers and the sardines.

At that point, if you had studied the miniscule print in the rear pages of the program, you might have been puzzled by a whole second set of credits, ads, bios and thank-yous for the production Nothing On by Robin Housemonger. It becomes clear pretty quickly that that title covers, barely, one of those sweetly naughty brainless farces stereotypical of middle class English theatre circuits -- a play with disguises, mistaken identities, a burglar, slamming doors, and a sweet little bit of crumpet who scampers around in her scanties. Is that what we're seeing?

Yes, and no. Playwright Michael Frayne takes that concept and spins it. A patient, aggrieved voice from the house cuts Mrs. Clackett's chatter short. Lloyd Dallas strides up to the edge of the stage. He sets Dotty Ottley straight about the sequence of business on stage, heaves a sigh and asks her to do it again. Ottley has stage experience but appears never to have played anything but variations on the same character, according to the program (she played "Mrs. Hackett, Britain's most famous lollipop lady ('ooh, I can't 'ardly 'old me lolly up!")). This is a late night rehearsal of a fourth-rate play by a third-rate touring company. We meet other members of the cast as the action of this bit of froth shudders along, late at night, to the more and more comic exasperation of director Dallas.