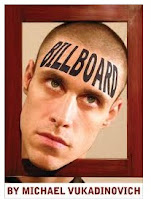 Andy, a recent college graduate weighed down by student loans, gets paid a great deal to tattoo a corporate logo on his forehead. His artist girlfriend Katelyn is not impressed, his liberal best friend thinks he's crazy, and now he has to live with it. The decision has both tragic and comic consequences as he comes to learn that the logo is more than just ink on his skin. But Katelyn sees a unique artistic opportunity. She sees his body as an example of the extent to which consumerism has permeated our daily lives. Billboard is a comedy about the battle between commercialism, fame, art and love.

Auditions will take place at the Emma S. Barrientos Mexican American Cultural Center - Raul Salinas Room, 1st floor (next to the main office), 600 River St., Austin, TX 78701 (click for map). To schedule an audition appointment, please email headshot/resume to casting@punchkinrep.org.P lease prepare a 1-minute seriocomic monologue. Auditions may also consist of cold readings from the script. For more info. about the company and its mission, please visit www.punchkinrep.org. You can follow us on Facebook.