Travis Bedard addresses the citizens via Kickstarter, appealing for funds to raise $4000 for the production. 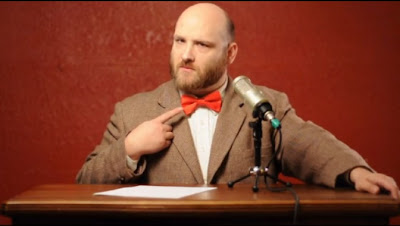 Click on image to go to video at Kickstarter.

Cambiare Productions is Travis Bedard, Will Hollis Snider and Amanda Gass. Teaming together for the last five years to bring a variety of projects to life including Elektra, Intermission, The Nina Variations, and Orestes, while also serving as Austin facilitators for World Theatre Day.

Back from a break (wherein Will opened his own photography business, Travis dug into social media with both hands and Amanda went and got a 37th degree (this time in math)) Cambaire is trying Something Old, Something New, Something Borrowed Something Blue.

Something Old: We're back with the Greeks...We will have our revenge on Euripides

Something New: This is Will's very first full length show (that isn't an adaptation).

Something Borrowed: Will has two cups full of references to and lines from classics jammed into this one text... .

Something Blue: is of course the theatre where we're performing it here in Austin

The STORY? Messenger No. 4 longs for something grander than message delivery, so one day he takes it upon himself to SHOW and not TELL. While fiddling with messenger speeches leads to streamlined plot points and dynamic scenes, it also unfortunately leads to the accidental erasure of history's greatest plays and --quite possibly--reality itself. Complete with sword fights, alternate universes, and an epic dance break, Messenger No. 4 is a high energy tour of love, fate and the Western Cannon.

And we need your help. Click to go to the Kickstarter page.