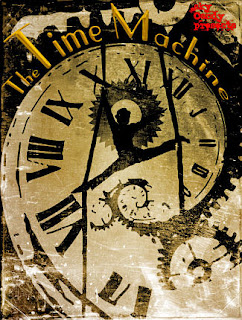 Ticket prices range from $10 - $25 and can be purchased at http://thetimemachine.eventbrite.com.

Sky Candy’s steam punk-inspired interpretation of The Time Machine brings a combination of contemporary circus elements like trapeze and contortion acts along with dance and martial arts to the narrative.

Conceived and directed by Sky Candy resident performer Joanna Wright, The Time Machine is set in 1895 and follows the story of an inventor who perfects a time machine that will take him and a friend 800,000 years into the future. They encounter several new races of people, including the Eloi, a gentle, innocent people living in the treetops, and the Morlocks, a mysterious clan who dwell in the underworld.

“Our adaptation of ‘The Time Machine’ takes inspiration directly from the book, which is packed with strong imagery and characters that create a perfect canvas for us to tell the story through a blend of acting and aerial dance,” said Joanna Wright director and Sky Candy resident performer.

About Sky Candy Sky Candy is an aerial arts collective whose mission is to develop and foster interest for the aerial arts in Austin, Texas. Founded in 2010, it offers aerial classes in multiple apparatuses such as silks, lyra, static trapeze, corde lisse for all skill levels. Sky Candy also offers open studio and rehearsal space in the fast-growing artist haven of East Austin. For more information, visit www.skycandyaustin.com.