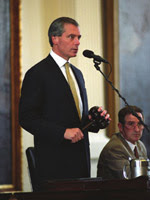 How is Lt. Gov. David Dewhurst like a radical Muslim leader? Because he's decided to get all condemnatory about the play Corpus Christi, thus drawing unwelcome and extraordinary attention to a student production and causing four plays to be canceled over safety concerns.

The play by Texas-raised and Tony-nominated playwright Terrence McNally, about a gay Christ-like figure called Joshua, was to be part of a performance of one-act plays performed by students at Tarleton State University today, March 27. It is not a minor work (Time's Richard Zoglin called it "witty but not patronizing, as sober and cleansing as a dip in baptismal water") nor is it new (it was first performed in 1998.) Dewhurst, for no readily apparent reason (hey, isn't it an election year?) decided to weigh in on a student performance through a full-blown press release on Friday afternoon.