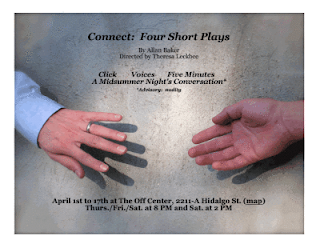 "We gotta connect. We just have to. Or we die." Terrence McNally, Frankie and Johnny in the Clair de Lune

June 4 at the Rollins Theatre, The Long Center

(25 minutes) It's Saturday night and two gay guys are online trying to hook up, each for a somewhat different reasons. Jason sees quick and easy sex as a way to avoid emotional intimacy. Michael sees it as a way to get to emotional intimacy more quickly. Jason: Adam Pearson Michael: James Jackson Leach

This play was produced as part of Austin's FronteraFest, at Hyde Park Theatre, in 2008. (Adult language.)

(32 minutes) A conversation across four generations, among five members of a family, all residents of a cemetery in rural Texas. Taking Our Town in a new direction, Voices focuses on Martha, the tyrannical, ninety-seven-year-old matriarch of a Texas family, born in the 1860s, and how she deals with the two most recent arrivals at the cemetery: Cole, a relatively young, gay victim of AIDS and Peggy, her seventy-five year old, oft-married, spirited and rather bohemian granddaughter.

A shorter version of this play was produced as part of FronteraFest in 2007. The current version was a finalist for Emerging Artist Theatre's 2009 Spring Festival of One Act Plays in New York City.