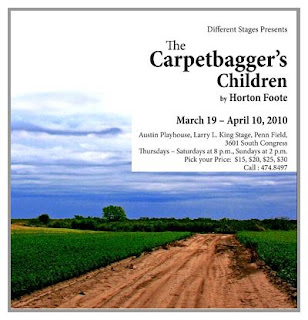 UPDATE: Review by Robert Faires for the Austin Chronicle, March 25

Related: Robert Faires' 1750-word profile of Horton Foote for the Austin Chronicle, March 10 (mentioning this production in a footnote below the text)

"I believe very deeply in the human spirit,
and I have a sense of awe about it
because I don't know how people carry on.
I've known people that the world has thrown everything at
to discourage them, to kill them, to break their spirit.
And yet something about them retains a dignity.
They face life and they don't ask quarters."
Horton Foote, NY Times Magazine, 1986.
Different Stages continues its 2009 2010 season with The Carpetbagger’s Children by Horton Foote, Pulitzer Prize and Oscar winning author of plays and screenplays such as The Trip to Bountiful, Tender Mercies and To Kill A Mockingbird.

In funny, moving, engaging monologues, three sisters spin the tale of their family and an era. Their father, the eponymous carpetbagger, was a former Union soldier who used his post as county treasurer and tax collector to amass a Texas plantation of twenty thousand acres. Preserving that plantation through the vicissitudes of their lives becomes a central issue for his daughters. It’s all about family secrets, tribal memories, sibling rivalry, and how change stalks our lives.