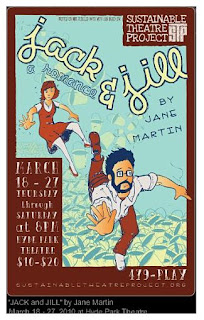 Jack and Jill is "a romance," according to playwright Jane Martin, the mysterious alter ego of Jon Jory, retired artistic director of the Theatre of Louisville. The Mother Goose reference implies a jaunty comedy approach, but Jack and Jill is anything but that.

Martin's two-character play is energetic and witty, but it's a portrait of two individuals incapable of merging two I's into a We. Jack is a big, bashful stumbling guy, all thumbs and vulnerability -- the anti-macho -- and Jill is bright, together, to-the-point, competitive and irredeemably selfish -- the antithesis of traditional femininity. Act I presents their courtship, marriage and frustrations; Act II presents their lives and successive encounters after divorce. They remain linked in the syzygy of mutual attraction, closer and then farther apart, unable to live together and yet unable to live apart.
Read more at AustinLiveTheatre.com . . . .