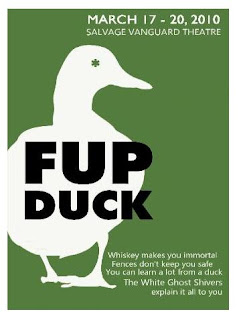 You might think something is missing in this fine adaptation of Jim Dodge's modern, backwoodsy fable Fup, as directed by resident artist Caroline Reck for Trouble Puppet Theater Company.

You might think something more is necessary for a feeling of completeness as Chris Gibson, seated all dignified and authorial at a small table, performs the sole narrator's job with such solid professionalism and such compelling mastery of different voices that you suspect the man to be a star at some major audiobook company.

As the puppeteers maneuver their near-life-sized, articulated mannequins of Granddaddy Jake and the tall boy called Tiny around the darkly appointed stage, their movements smoothly choreographed and well-rehearsed, you might imagine . . . .