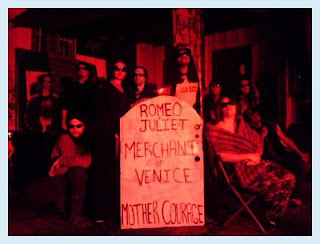 We've been working hard on 3 productions at the same time. Here they are with their performance dates, Thursdays - Saturdays at 8 p.m.

Romeo and Juliet (April 15 - May 1) is a repertory production directed by Japhy Fernandes. Cast members coming back from the '07 production include Casey Allen as Romeo, Japhy Fernandes as Friar, Christopher Harris as Paris, and Aaron Lawhon as Benvolio. New cast members include Ashley Mcnerney as Juliet, Sabrina Taributton as the nurse, Java as Lord Capulet, Teddy Fernandes as Tybalt, Steven Brandt as Mercutio, Lakeva Greene as Page to Paris, and Sarah England as Lady Capulet. Ellen Fernandes does lights and sound.

Set in the present with modern costumes and dance...some live loud electric guitar rock and plenty of colored lights and a fog machine. A few things are changed in this updated version....Paris is bound to a wheel chair from the top of the show. Tybalt wears a dress to the ball. Someone else kills Juliet at the end. I call it our Kurt and Courtney version...all apologies.

Merchant of Venice by William Shakespeare (May 6 - 22). We did this gem back in '08 and gave it a 'Three is Company' sit-com type of feel. Set in modern times, and characters like Shylock and Antonio do their business on the raquetball court rather than on the Rialto. Portia and Nerrisa chew and twist gum around their fingers while choosing a husband with the choice of the right box. And then there is the famous courtroom scene. There was a man who recently flew a plane into an IRS building here in Austin -- in a final letter he made reference to this play when he told them that they would get their "pound of flesh...." You'd have to see the play to understand what he was getting at.

Returning from the original cast is director Japhy Fernandes who now takes the role of Shylock. Christopher Harris is back as Antonio, Casey Allen is back as Lorenzo. Making a triumphant return to the Austin Drama Club, Kevin Karwoski takes the role of Prince of Arogon/Duke. Sarah England (the witch from Macbeth) is our new Portia. Steven Brandt is our new Bassanio. Look for more new faces in this light hearted drama of a buisness/love deal gone bad.

Mother Courage by Bertolt Brecht (June 3 - 19). It's a new show for us and our 1st attempt at Brecht. Austin Drama Club legend Aaron Lawhon makes this his directing debut. More details about the cast and play are coming soon.

Also, we've done some work on our performance space to give audiences more leg room, softer seats, and better air flow, so visit us again. Remember, for all shows seating begins 7:30 p.m...shows start at 8 p.m. We do our best to seat any latecomers. BYOB. No concessions. Donations go in the jar marked "donations." Contact japhyfernandes@live.com for specific location, directions or any other questions.