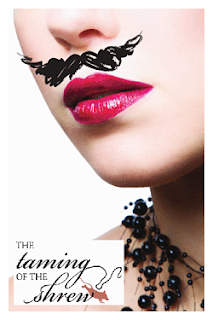 Much of the comedy in Shakespeare's Taming of the Shrew arises from farcical transformation. Lucentio changes places with his servant Tranio; both suitors to the fair Bianca disguise themselves as tutors; an aged traveler is intimidated into playing the part of wealthy old Vincentio, Lucentio's father. And of course, the titular shrew of the piece, "Kate the curs't," is a woman seeking to assert her rights to autonomy, choice and respect, as if she had all the rights of a man!

The Elizabethans had no problem with that. In the post-show discussion on opening night, University of Texas prof Dr. Emily Richmond-Garza, head of the comp lit department, reminded actors and audience that in the theatre of Shakespeare's time there were two sure-fire crowd-pleasing delights: fights and wife-beatings.

Our own time finds it difficult to swallow the basic premise of The Taming of The Shrew, which is Petruccio's macho conquering, abasement and subjugation of Kate. Earnest apologia or exculpations appear in director's notes for some productions. Some directors emphasize Kate's intelligence and wiliness, providing interpretations and stage business indicating that rather than capitulating to Petruccio, she has in fact outsmarted him and everyone else.