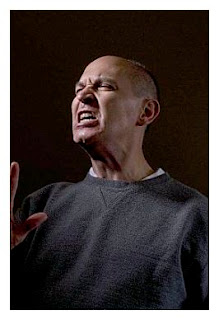 Received directly from UT, the word that Robert Faires will reprise part of his breath-taking solo performance of Henry V:

The David O. Nilsson Lecture in Contemporary Drama takes yet another wild turn this year with Austin Chronicle Arts Editor Robert Faires stepping in to reprise an excerpted version of his notable one-man take on Henry V.

The performance ­ titled "This is Not a Pipe" ­ will take place in the Capitol Room of the Blanton Museum of Art's Edgar A. Smith Building at 5:30 pm on Thursday, April 1. A reception beginning at 4:30 p.m. will precede the event .

The original version of Faires's Henry V played last summer at The Off Center Theater and garnered enthusiastic reviews for its combination of spare presentation and complex performance. Faires will pare down the previous adaptation while attempting to further disrupt the partition between audience and actor in this modernist perspective on Shakespeare's epic history.

The Nilsson Lecture was founded through the generosity of Dr. David O. Nilsson, a retired mathematics instructor at The University of Texas at Austin, independent scholar and Henrik Ibsen aficionado.