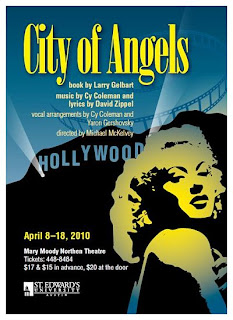 You have to be alert in this town to catch St. Edward's stagings at the Mary Moody Northen Theatre, off South Congress. They're of professional quality, well directed, well designed and well received. They even feature two or three Equity guest artists per production, whose participation spurs the already gifted St. Ed's students to even higher levels of accomplishment.

Their productions flash across the horizon like meteors, though. Two weekends and that's it.

City of Angels director Michael McKelvey in his white jacket and carnival barker style promised us before this show that next year the University will add another production, to make a season of five. He was hawking season tickets, available at impressively modest prices ($60 for general admission level). He forgot to mention one of the most agreeable aspects: the fact that the box office will call you well in advance to ask for your preferences for date and for location in the stadium seating of the MMNT theatre-in-a-square.

I had asked for my usual obsessive preference, first row, as close to the action as I could get. Not the best choice, I discovered, for this show, in this theatre.

Yes, the action opens right in front of you on the wide floor of the stage, and I jumped with anticipation when a striking quartet strode on with an up-tempo late 1940s stalking scat number. Michelle Brandt, Nathan Brockett, Andrew Butler and Elizabeth Newchurch glowered, postured, whirled and flirted across the floor with glinting, cynical sophistication. Then David Long as the private detective, Stone, arrived before me in his bare office. His gal Friday, Oolie, reluctantly let in a strange woman with brass blonde hair and black lipstick. The wise cracking began, a standoff of suspicion, while we got to hear Stone's thoughts, phrased in gaudy similes. Blonde Alaura Kingsley wanted Stone to locate her missing stepdaughter.