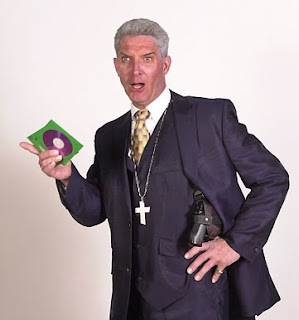 UPDATE: Talk-back with the cast following the show on Friday, May 30

a satiric comedy by Eric Coble

Armegeddon is coming to the Hill Country, in the shape of a satirical comedy Virtual Devotion, opening at the Wimberley Playhouse on April 16. Written by Eric Coble, it depicts a day in the life of three members of a shattered family trying to navigate a world of pollution, terrorism and disease to make some connection through – and in spite of – their faith.

Pete is a televangelist for “The Mature Warriors of Christ,” a pulpit from which he preaches violent hate against sinners, especially youth, to his 35 million viewers. He is on top of the world until he discovers he has the Mystery Plague, a fatal illness he has heralded as God’s vengeance. Anne, a sweet young telemarketer for the Happy Halo Ministry for Children, is up against a deadline to raise funds to send CD-ROMs on the Book of Job to the children in Sudan, when her business line is mistakenly advertised as a National Confession line.

Ruth, a sardonic, isolated woman, views the world from her armchair until she sees the face of the prophet Ezekiel in her tapioca pudding; now the world is clamoring at her door as everyone from CNN to Disney scrambles to cash in on her miracle. Jesus comes back and answers the age-old question, “What Would Jesus Do?” In this day and age, he would begin his day in a temp agency and find himself in a string of service economy jobs. These four characters become deeply entwined in one another’s lives, eventually meeting up on the “Home Shopping Network” selling religious artifacts.