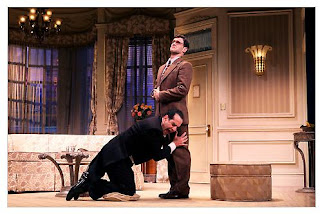 Found on-line, Isherwood's thoughts about reviewing theatre when your reactions differ from those of the audience:

“Am I missing something?”

If you attend the theater with any regularity, chances are good you’ve had the occasion to inwardly ponder that question at least once in the course of your culture-consuming adult life. You may also have found yourself asking it aloud, of a companion, as you hurtle toward the bar at intermission, or even hissed it, sotto voce, during the show itself. The query, usually arising with a prickly feeling of insecurity or mystification or angst, is a byproduct of a common but little-discussed cultural phenomenon: the odd-man-out syndrome.

This can roughly be described as the experience of attending an event at which much of the audience appears to be having a rollicking good time, while you sit in stony silence, either bored to stupefaction or itchy with irritation, miserably replaying the confluence of life circumstances that have brought you here. (“Curse that Isherwood!”)