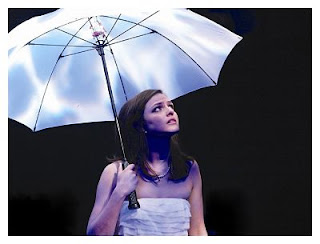 Dave Steakley and the large, talented cast at the Zach have a good time with the clever palimpsest of modern Austin that they use to reinvigorate a text that many of us first read in high school. It works, too, at least most of the time. This styling reminds us gently, insistently and with a smile, much like Wilder's Stage Manager narrator and chorus, that the although the play refers to a specific time, place and culture, it's really about the eternally repeating experience of mankind. Those ancients and ancestors, of the Sumerians and other vanished cultures including our immediate forefathers and foremothers, went through these experiences or something very much like them. Family, growing up, courtship and marriage, the end of life and the passage to something eternal.

Wilder's innovation, in a time of earnest realism in the theatre, box sets and meticulously furnished onstage drawing rooms, was to sweep the stage bare. He was unapologetic about that. The Stage Manager describes for us the layout of the town -- the churches, the shops, the livery stable, the Cartwrights' mansion on the hill, the Gibbs house and that of the Webbs. All are invisible. "And here," says he, "is a tree, for those who must have some scenery." He allowed characters and stagehands to carry on some chairs and a table, but the rest of Grover's Corners existed in the mind's eye.

Dave Steakley mostly respects that approach and enjoys the liberty it gives him as a director. Jason Amato's subtle, lustrous and haunting lighting dresses this stage, more than anything else, and every moment at the Kleberg stage is visually memorable.