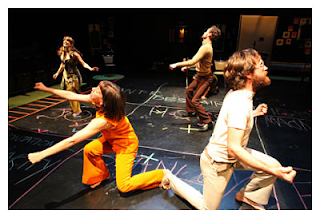 Published by the Austin Chronicle on April 1:

How Austin looked on the national stage

by Robert Faires
[. . . ] This latest Method Gun – the "10% sadder version," claims playwright Kirk Lynn – played in a 160-seat black box with audience on three sides, and whether it was that space's heightened intimacy, my own familiarity with the material, or a tightening of the show, the Humana staging moved me more than any version I'd seen. Cast members Thomas Graves, Hannah Kenah, Lana Lesley, Jason Liebrecht, and Shawn Sides keep getting deeper under the skins of the misfit disciples of acting guru Stella Burden, who, after she abandons them, question what they've learned and how to finish the project they've been rehearsing for nine years: a version of A Streetcar Named Desire that omits Blanche, Stanley, Stella, and Mitch. The Method Gun has always struck me as being more about how to live than how to act – whenever its characters express anxiety about behaving the right way "onstage," I hear "in the world" – and that hits home more poignantly with each viewing. [. . .]
Read full review at AustinChronicle.com . . . .