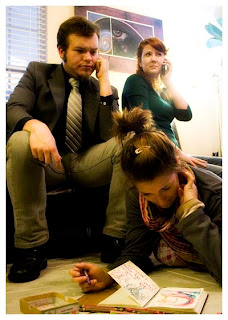 UPDATE: Review by Virginia Heckenlaible for the Daily Texan, April 28

God's Ear
the Off-Broadway play by Jenny Schwartz
directed by Amelia Turner in its regional premiere
at the Blue Theatre, 916 Springdale Road
April 22 – May 2, Thursdays - Saturdays at 8 p.m., Sundays at 5 p.m.
with a matinee performance on Saturday, May 1 at 2 p.m.
General admission $15, $12 for seniors, military, and students with ID, available through www.biophiliacproductions.com, at www.smarttix.com, or fromSmartTIX at (212) 868-4444. Group discounts for 6 or more available through Biophiliac Productions. Cash only at the door.

God's Ear introduces us to Ted and Mel, a devastated young couple trying to come to terms with their son’s accidental death as their marriage and lives begin to disintegrate. Lost in their bizarre labyrinth of grief, Ted seems continually to run into parents with dead children. Everything Mel touches turns to stone. Their daughter Lanie starts receiving counseling from a G.I. Joe doll and from the Tooth Fairy. Central to God’s Ear is the concept of language, inventively explored as the characters rely on repeated expressions and clichés in an attempt to navigate their grief. 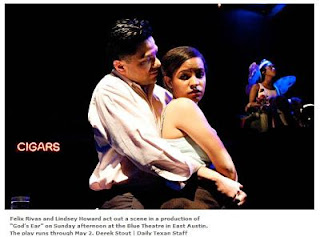