How The Other Half Lives by Alan Ayckbourn, City Theatre, March 25 - April 18 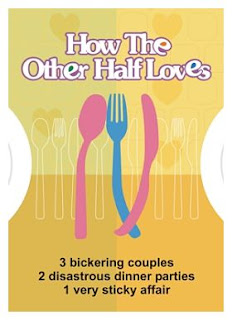 Alan Ayckbourn applies a clever staging twist of time and space in the first act of this contemporary English comedy of manners, and it is a delight to watch the City players accomplish it.

How The Other Half Loves, as the title implies, is a satire of class and sexual mores. I repeatedly mistyped that title in the ALT "images" feature for the production, because my fingers were finding their way back to How The Other Half Lives, the famous work of photojournalism by Jakob Riis, an 1890's exploration of the slums of New York City. That's an additional little ironic note on economic development in the UK, for these two couples are separated far more by class habits than by economic well being.

Frank Foster is the hapless, clueless university-graduate manager at an unidentified firm and Bob Phillips is his smugly lower-class subordinate. The generic living room represents the snug little homes of each man and his wife. Ayckborn's joke is that he runs separate actions simultaneously in the same space, with the couples unaware of one another's presence. This is better than cinematic cross-cutting of scenes, for we're suddenly endowed with a sort of hallucinogenic X-ray vision, comparing the couples, their relationships and their games with one another -- for we rapidly understand that Foster's wife the nervy, nervous Fiona was out the previous evening for a spontaneous roll in the hay with yobbo subordinate Bob Phillips. Phillips' wife Teresa is angry that he was out until 2 a.m. the previous evening and is avoiding her insistent questions about his whereabouts.