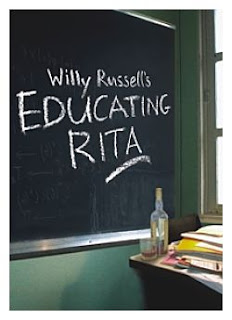 During the course of an academic year a young woman and a disillusioned professor have a profound effect on each other in Willy Russell’s bittersweet, award-winning comedy.

Susan, who initially calls herself Rita, is a young working class hairdresser. Unhappy with the routine of her life, she decides to attend an Open University course in English Literature. Dr Frank Bryant is the cynical career academic assigned as her tutor for the course. The two have an immediate effect on one another; Frank is moved by Susan's eagerness and vitality and is forced to re-examine his attitudes and position in life; Susan finds Frank's guidance opens doors to a new lifestyle and self-confidence. However, the changes are short-lived as Frank observes Susan beginning to adopt the pretensions of the University culture he despises. Susan also becomes disillusioned with her new social niche when she realizes it contains the same flaws as her old life. Eventually Frank and Susan must reconcile their new perspectives with their old lives in this touching comedy.

Willy Russell is the author of several popular plays including Shirley Valentine and the musical Blood Brothers. Educating Rita won the Laurence Olivier Award for Best New Comedy in 1980.