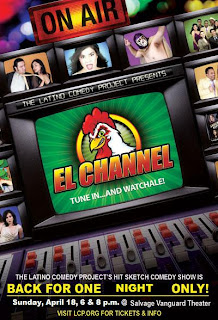 ONE NIGHT ONLY! Sunday, April 18 at 6 p.m. and 8 p.m .
Salvage Vanguard Theater, 2803 Manor Rd
All Shows PAY-WHAT-YOU-WISH, Tickets available at the box office on performance evenings

The LCP returns with an encore presentation of “El Channel”, their newest full-length original sketch comedy show unlike anything you've seen from them before – with all-new sketches added!

Dysfunctional divas and celebrity goats. A right-wing militia-man on a mission. An intern program with a 100% fatality rate. The Jewish-Mexican Mafia. The worst women's talk show panel in tv history. A doomed attempt at "tweeny-bopper" entertainment titled "Public High School Musical." And much, much more. It can all be seen on "El Channel," a TV station which re-defines the meaning of “on the border.”

Media, pop-culture, and parody collide as we go behind the scenes for a look at the inner workings of the most legendarily disaster-prone television station on the airwaves. “El Channel” introduces a universe of new and unforgettable characters, along with the LCP's fast-paced whirlwind assault on the absurdities of politics, pop culture and the world of entertainment. Don't miss this bitingly hilarious stage and video extravaganza from The LCP! “Tune in…and watchalé!”