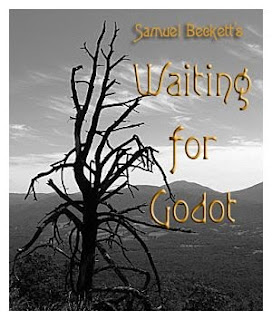 Director Veronica Prior took on the job of directing this classic piece of twentieth century theatre despite some misgivings. She writes in the program, "I studied this play in college, as many of us did. I have seen several different productions over the years, and wondered what was wrong with me, that I just didn't 'get it.' I am a simple person, not a philosopher. To be honest, I know very little of the 'isms' that others see in this play. I see a story. A good story, and one that has something for each of us to hear."

This production proves her wrong. Ronnie Prior does "get it." This is a notable staging, an exploration in airy, droll and quizzical comic mode. Actors and director do not flinch from Beckett's dark message, but they glide through it, moment by moment, with a tolerance for ambiguity and for one another.

This text from the 1950s, written first in French and later converted by the author into English, has provoked endless debte and discussion. Martin Esslin used it to push the thesis of his book The Theatre of the Absurd. Vivien Mercier wrote a famous review in the Irish Times calling it "a play in which nothing happens, that yet keeps audiences glued to their seats. What's more, since the second act is a subtly different reprise of the first, he has written a play in which nothing happens, twice." And if you want a summary and a long taste of the "-isms" eagerly applied to the play, spend some time with the entry in Wikipedia.