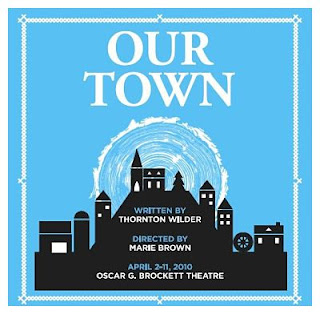 Stage Manager:
I've married over two hundred couples in my day. . . .
M . . . marries N . . . . millions of them.
The cottage, the go-cart, the Sunday afternoon drives in the Ford, the first rheumatism, the grandchildren, the second rheumatism, the deathbed, the reading of the will --
Once in a thousand times it's interesting.
[He now looks at the audience for the first time, with a warm smile that removes any sense of cynicism from the next line.]
Well, let's have Mendelssohn's "Wedding March"!

There's a deceptive simplicity to Thornton Wilder's Our Town.

It is, after all, a play about ordinary people in a small town. Nobodies. Or, rather, Everybodies.

I encountered it early in the second half of the twentieth century because it was included in its entirety in the high school English textbook. For eleventh grade. Maybe twelfth grade. No big words. No controversy. In fact, not much drama. Boy and girl meet, court, marry, look back over their lives and the story ends in a quiet graveyard on a high hill under the wild stars.

Staging something this simple and yet this profound takes a lot of insight. Director Marie Brown has done a lot of things right, the chief of which was the decision to entrust Tom Truss with the role of the stage manager.