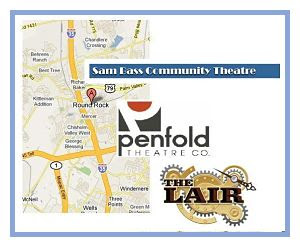 What's Up With Round Rock Arts?

In 2000, according to the census, there were slightly more than 60,000 people in Round Rock. Today the city estimates just under 100,000 residents. With this kind of population growth one can expect to see industries and communities of all kinds flourish, and that includes the arts. Round Rock has been home to the Sam Bass Community Theater since the early 1980s, but outside of that venue, there hasn't been much in the way of live theater in Round Rock.

That starts changing today, however. The Lair, founded by improv enthusiast Alex Gray, opens its doors tonight at I-35 and Gattis School Road. And what's more, Penfold Theatre Company is getting ready to launch a second Round Rock-based theater within the year. Austinist caught up with some of our neighbors to the north to find out—what's going on up in Round Rock?

So why are the people at The Lair and Penfold Theatre Company interested in doing theater in Round Rock instead of Austin? According to Penfold's Ryan Crowder, "There's a window here. There's a hole."