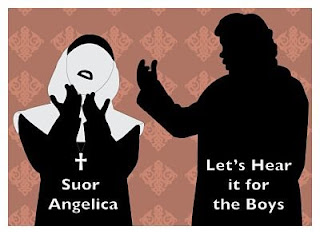 Let’s Hear it for the Boys!

Suor Angelica, a one-act opera by Giacomo Puccini, set in a Siennese convent. Central characters to this lavish and tragic tale of loss, repentance and redemption are Suor Angelica, played by soprano Leah Knight, and the Zia Principessa (Suor Angelica’s aunt) played by mezzo-soprano Lisa Alexander, with stage direction by Cindy Sadler and music direction by Chuck Dillard.

Let's Hear It For the Boys, staged by Rebecca Herman, opens the show with a mélange of glorious music and excerpted scenes from some of the most poignant moments of popular operas such as La Bohème, The Student Prince, The Pearlfishers and The Ballad of Baby Doe.