Upcoming: The Difficulty of Crossing A Field, University of Texas, April 23 - May 1 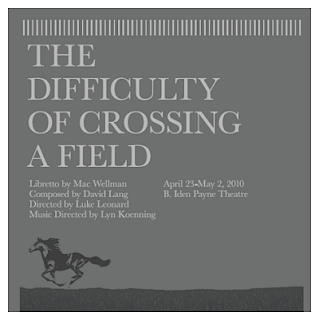 UPDATE: Additional quote from Robert Faires' interview with composer David Lang, Austin Chronicle, April 29 -- "Mystery is where it's at."

UPDATE: Vimeo video of scene from The Difficulty of Crossing A Field, captured by John Clare for Texas Public Radio (click this link, then go to bottom of page at AustinLiveTheatre.com)

UPDATE from UT Theatre & Dance: A Conversation with Mac Wellman and David Lang All theatre patrons are invited to attend this intimate pre-performance talk with the creators of The Difficulty of Crossing a Field. Refreshments will be served.April 23 at 6:45 p.m. at Winship 2.112 -- Space is limited

UT at Department of Theatre and Dance presents

The Difficulty of Crossing a Field

*Join us April 23rd for an Opening Night Reception immediately following the performance. Guests will be able to mingle with the cast, crew, and director of The Difficulty of Crossing a Field while enjoying an assortment of light snacks and desserts.

A slave-owning farmer in the pre-civil war American South walks across his field in and disappears in plain view of his neighbors, his family, and his slaves. Everyone has his or her view of what the disappearance means, but the more the witnesses try to recount the disappearance, the more elusive it becomes. Crossing the boundaries of musical theatre and opera in this inventive new play mixes spoken and sung text with a moving score and intense drama.