Upcoming: Excuse Me While I Change!, Michelle Cheney at the City Theatre, April 22 - 25 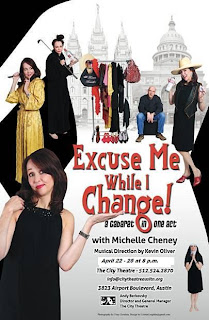 Excuse Me While I Change!

After a sold out February premiere, the Austin musical performer and comedienne brings her hit cabaret show back to the City Theatre stage for one weekend only, April 22 – 25.

Michelle Cheney, singer, actress, comedienne, and Austin original (we like to think so) brings her “musical take” on life and its changes back to The City Theatre April 22 - 25 for the presentation of her one-woman show Excuse Me While I Change. Revamped for the April performance, Michelle’s comedic, yet heart-warming show about living, loving and laughing, features music from some of Broadway’s greatest composers and with special material and direction by Austin Cabaret Theater director Stuart Moulton.

You wanted expanded wardrobe changes? You got ‘em. More music, more fun?? Accompanied by musical director Kevin Oliver, Michelle will spend an entertaining evening looking at changes in her life, her relationships, growing up in conservative Utah, along with humorous encounters in the Lone Star State.

She commiserates with the wife of Tiger Woods in the hilarious “My Husband is Playing Around” as well revealing new pieces about the secret fantasy world of the married woman and a medley of surprising thoughts on a variety of men and their unique attributes. Well-known pieces are featured including “Moon River” and “Keep My Love Alive” and a little fun on trying to stay beautiful with “Send in the Clowns.”